He's the Black Me and I'm the White Him 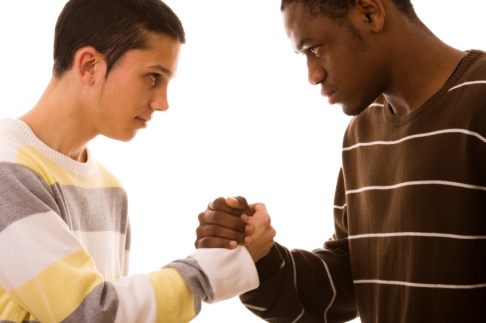 I have spent a lot of time talking about the death of Mike Brown with my sons this week. It is not out of the ordinary for our family to talk about the news and especially how current events intersect the lives of young people. One particularly hasty conversation took place standing up in my bedroom after they told me they wanted to drive thirty minutes up the highway and join the protests. "Unarmed teens should not be shot dead in the street, Mom. I've been stopped lots of times by the police. I've never been shot at. This isn't right."

My big boys at home this summer are fifteen, nineteen, and twenty-year old white males. They are comfortable in cowboy boots and pick up trucks. A highlight of their summer is the annual county rodeo because life on the edge of a large metropolis means they were raised half-way between the suburb and the country. There is no apparent reason why they should want to go throw up their don't shoot arms before a combat clothed police officer with only an automatic rifle between them. By outward appearances, my boys might seem better pictured in a social media meme with their four-wheelers and hunting rifles and a degrading comment focusing on the race and stupidly of the looters in Ferguson.

I blame this tinge of activism on my children's grandparents. Convenient, right? In the late 1960's they took me to North Carolina so my father could be one of a few white professors at a historically Black college. Nationally, the country was boiling with racial issues. The community ostracized the new teachers. Our family lived in a tent at the state park because nobody would rent to my parents. Perhaps something in the smoke from the campfire drifted deep into my three-year-old lungs. Or maybe it was just hearing the stories of that time as I grew up that settled convictions about race and racism deep into my soul. Fast forward twenty-ish years. Jesus saved that soul and plopped it down for another twenty-ish in an all-white St. Louis suburban church.  I learned a lot of good stuff there. But I also emptied a room once at a social gathering when I asked why there were no blacks at our church. That day I learned silence is a powerful tool. My fellow parishioners did not considered themselves racist. Racism was just not a problem they felt they needed to address. Their form of racism was a problem I had to address. Most times by holding my tongue. Sometimes by asking questions. Once by asking a teen friend from youth group telling black jokes to leave my house.

It was the joke that got me talking about race with my children. And as we talked about race and racism, the civil rights movement in the past and problems today, my childhood experience and my hopes for their life experiences, I realized we needed more than words. We needed black friends. We needed names. Stories. Shared life experiences like the ones my parents gave me. Because in reality it was not the campfire smoke or my father's reminiscing, but memories of people we did life with in the south the shaped my views on race.

As I have processed this week in St. Louis with my boys, we have talked a lot about community. Their communities. The ones they live in both physically and virtually. Home is still on the edge of suburb and country. Church is in the city. There is school. And Facebook. They are struggling with the way their differing communities are talking about Mike Brown and Ferguson and the police. "Six foot, two hundred pound thug..." they read in a social media post written by one of their community members. A post that says loudly, "The boy that does not even deserve to be called by his name. A description will do." And that description might be glossed over in silence except that for my boys it is a description that fits others in their community. Tony. And Darwin. And Garrionn. And Parker. And Chucc. Big black teens and men in my boys' lives. Teens they call brother. Men they look up to. So my boys come to me over and over this week to talk about this physical and virtual living halfway between the all white St. Louis suburbs and the black side of town.

"Mom, do you know who so-and-so is at youth group," starts one of our conversations. "He is really tall and skinny. Skinnier than me." I tell him I do not think that is humanly possible. This son became a stick last year. "No Mom. He's skinner. But otherwise, we're a lot alike. We like the same music and books and movies. He's the Black me and I'm the White him."

And suddenly it makes sense why my white boys want to protest in Ferguson, Missouri this week. Because even though they see no disparity between themselves and another skinny kid in youth group, they know some in their multiple communities still notice the difference.